CUPHEAD REVIEW: “STANDS TALL AMONG THE BEST 2D SHOOTERS OF ALL TIME”

by Super admin on 09/29/2017
38
0
previous article
Destiny 2 Xur Location Guide: Where Is He And What Exotics Is He Selling (September 29)?
next article
魔力寶貝手遊評測：魔力魔力 隨心所欲
Content 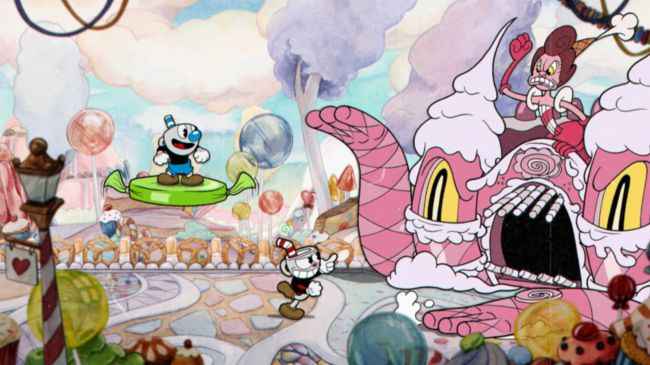 Ah, to be blistered again. My thumb hasn’t felt this way since who knows when – but Cuphead lovingly put my opposable digit through the ringer, leaving a physical manifestation of hours spent in a highly focused, fervently determined, thoroughly delighted state. And for everything this splendid sidescroller demands of your abilities, it rewards you tenfold with astounding sights, enlivening sounds, and a warming sense of accomplishment. Patience, pattern recognition, and raw twitch reflexes are practically prerequisites, but those who take on the challenge will find that Cuphead stands tall among the best 2D shooters of all time.

Cuphead and Mugman, I should say. Our two demitasse-domed heroes made the mistake of gambling their souls at the Devil’s casino, and must pay off their debt by besting the many bosses who reside on Inkwell Isle. Right from the title screen, Cuphead douses you in its charm, greeting you with an adorable animation and a barbershop quartet crooning about the beverage-brained brothers’ current predicament. Few games capture a distinct medium and mood as well as Cuphead, which channels every aspect of cartoons from the 1930s, in the vein of Fleischer Studios’ Betty Boop shorts and Disney’s Silly Symphonies.

Faithfully hand-drawn, painstakingly cel-animated characters bounce gleefully with each frame, flashing toothy smiles that range from cheery to dastardly. The gorgeous watercolor backdrops are on par with those in Snow White and the Seven Dwarves, unveiling a stunning wealth of detail upon closer inspection (provided you can rip your attention away from the lavishly animated action). And the soundtrack is an absolute hoot, bursting with jazzy big band numbers and sprightly ragtime ditties. Perhaps it was the high of finally downing some particularly tough bosses, but the tune accompanying the post-fight victory screen often had me jauntily snapping my fingers to the beat like a man possessed. 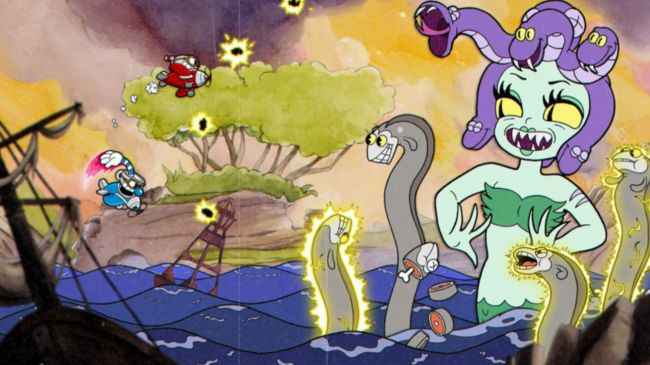 The ’30s throwbacks pervade every last detail. Load screens clue you into the persistent visual filter that replicates the look of a vintage film reel, backed by the comforting white noise of a vinyl record’s distinct crackle. Everyone speaks in booming, echoey, distant-sounding voices – from the snouted shopkeeper at Porkrinder’s Emporium, to your co-op buddy bellowing “Thaaank you!” whenever you rescue them – akin to the unforgettable “Don’t you believe it!” bit from classic Tom and Jerry. Dialogue during the brief bits of story include multiple exclamations of “Golly!” and “Hot dawg!” Cuphead’s presentation pops in every imaginable way, and the old-school cartoon stylings pair beautifully with the retro 16-bit era gameplay. 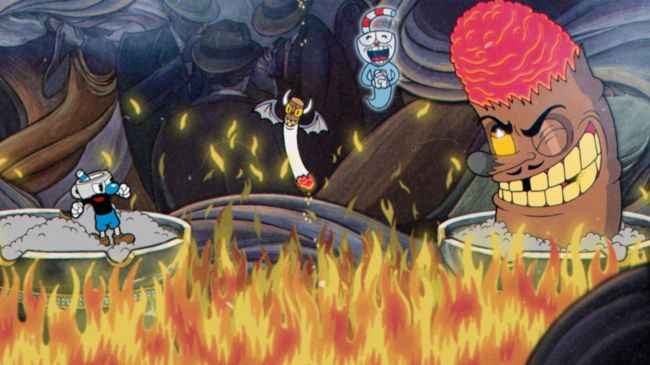 You should think of Cuphead as a series of increasingly difficult boss fights, though there are a small handful of platforming “Run & Gun” levels mixed in. Each encounter pits you (and a friend, in two-player couch co-op) against a larger-than-life opponent with an entirely unique set of attacks, cues, and weak points. Fights tend to take under three minutes, but that’s usually after you’ve carefully studied your enemy’s multiple phases over the course of many, many failures. This is the kind of game where, once you’ve gotten your bearings, any early damage you take should probably default to a quick, painless retry. Progress is only palpable through your rising skill: there are no checkpoints, no mid-battle health pickups, and no methods for cheesing through a fair fight. All you can depend on are your wits, reflexes, infinite lives, and the tightly tuned controls. Cuphead’s handling is so intuitive that before long, quick-dodge dashing, eight-way firing, and jump-parries that nullify any attack color-coded pink (which quickly becomes crucial to your success) will feel like second nature.

Classic inspirations are apparent all throughout Cuphead, with callbacks to genre godfathers like Mega Man, Contra, Metal Slug, and Gunstar Heroes – but always with some unique twist, elevating their designs above nostalgic mimicry. Every imaginative encounter tests your skills in some surprising, rousing new way – including welcome shmup skirmishes that keep things varied, as you blast your adversaries in an adorable biplane that can shrink to make dodging a teensy bit easier. If you’ve collected enough coins from the brief, far-less-difficult Run & Gun stages, you can purchase additional weapons and passive boosts to hone your playstyle – and every powerup has its place. I was certain I had equipped the only two weapons I would ever need, only to find that all six flavors of firing had their time to shine against certain bosses.

Never did I feel frustrated by Cuphead, even after repeatedly failing on the last smidgen of a boss’ health bar (which is only visible after your death). No boss felt insurmountable, like some brick wall I’d be slamming my head against until I scraped out a desperate win. Cuphead’s peppy, immaculate presentation just has this way of soothing any mounting slipups like some invigorating salve; even the quippy taunts that bosses spout whenever you die brought many a giddy smile to my face. And when you finally do triumph over a trickier boss, oh, what a feeling. Victory is always well-earned, whether you’re cutting your teeth on the Simple difficulty or entering the Regular ring (which you’ll have to step up to if you want to finish the game – and unlock the boss-amping Expert mode).

There’s also a pleasant amount of metagame to explore within the Inkwell Isles. The overworld is rife with secrets and creative methods of progress: you can seek out new pathways to take on an area’s five bosses in a flexible order, NPCs give you optional quests via cryptic clues, and coins and shortcuts are hidden out of sight. It’s a bit strange, then, that there aren’t a few more amenities thrown in that the modern player might be expecting. You’re graded after each stage, but you have no easy way to check your records, and there aren’t any leaderboards to see where you stand. At launch, local is the only way to co-op play (though there are plans to add online later). But these all feel like minor gripes in a complete package where even the smallest feature was crafted with care. Heck, the Devil’s second-in-command, King Dice, has an entire song dedicated to him – which only plays in tiny, combat-free rooms that most players will cruise right on through. That kind of ancillary-but-appreciated effort reminds me of Skullmonkeys’ “Little Bonus Room” song that’s near and dear to my heart.